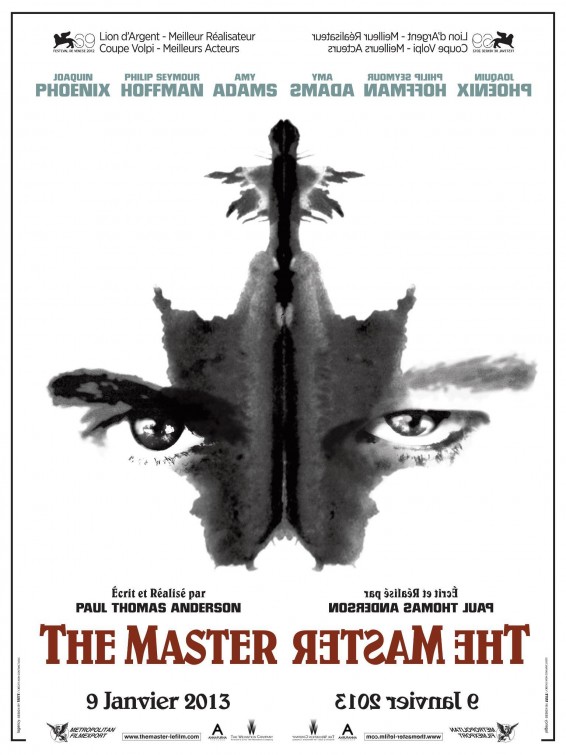 R, 137 minutes
Starring- Joaquin Phoenix, Phillip Seymour Hoffman, Amy Adams
2/ 5 Stars
The Master centers on a troubled World War Two vet named Freddie (Phoenix), an alcoholic who has been laid off from a plethora of jobs over the course of a few months. In a drunken state, he wanders onto a partyship where he meets The Master (Hoffman) of a new and rising religion, which has similarities to Scientology, called The Cause. Freddie, who seemed crazy before on account of his constant drinking, is now diving into an even deeper level of crazy once he becomes a follower of The Cause.  Adams plays the wife of The Master, a devoted but stern 1950’s woman.
The only thing that was exceptionally good in this movie was the acting. Simply superb acting from all the cast, especially from Phoenix, who gave a remarkable performance as the troubled Freddie, diving into deep, emotional agonies that made the performance very convincing. Hoffman, too, gave a stellar and real performance while Adams played a very straight faced, serious role that is nothing like what Adams has played before.
Now, for the bad news. I am a huge fan of P.T. Anderson’s 2007 film There Will Be  Blood and when I found out he was directing this film, I was very excited. Unfortunately, the characters are unlikable and uninteresting; their stories are not compelling in the slightest. The movie as a whole is excruciatingly boring and tedious, leaving me to check my watch every twenty minutes, just hoping that the movie would end. I saw the film with my father, who actually fell asleep halfway through.  Afterwards, I felt like I could take a nap I was so tired from having to force my eyes to stay open through the boring slosh of this drama that was anything but dramatic.  The Master is anything but a masterpiece.