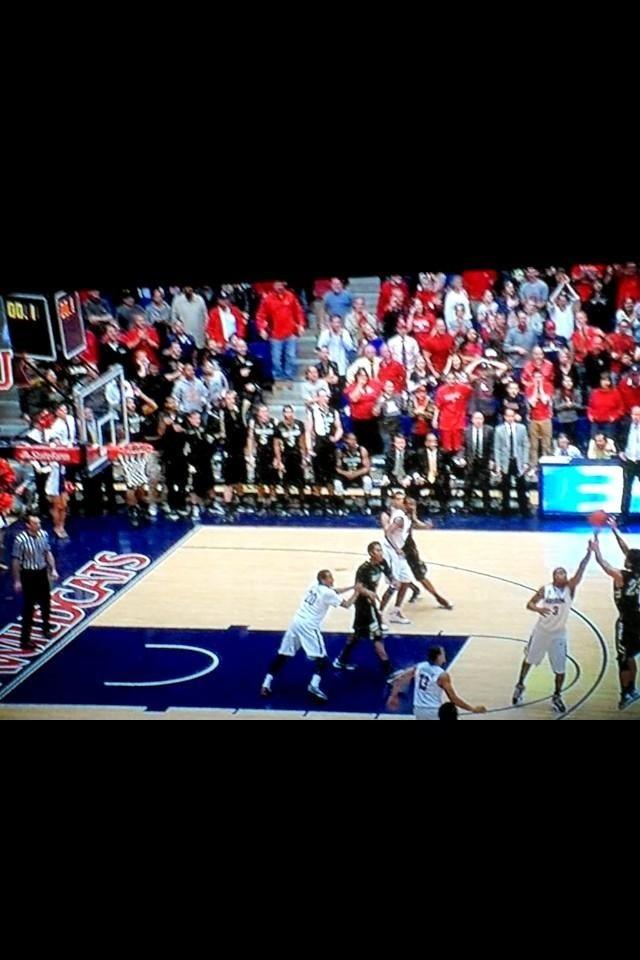 This is the freeze-frame featured on ESPN's SportsCenter of Monarch Alum Sabatino Chen's shot against the Arizona Wildcats at the end of the game Thursday. The would-be game-winner did not count after the referees reviewed the instant replay. It is still impossible to definitively tell whether or not the ball left Chen's fingers before the clock hit zero, but the TV show's hosts agreed that it did.

Though there are countless moments from Colorado’s game against Arizona  Thursday that show just how impressive the Buffs were against a nationally-ranked school, only one moment mattered at the end.  That moment occurred a millisecond before the buzzer sounded. Or maybe it was a millisecond after the buzzer sounded. That uncertainty, though, is what caused quite an uproar.

Coming into Thursday’s game against the #3 Arizona Wildcats (now 13-0, 1-0), the Colorado Buffaloes (10-3,0-1) had a lot on the line, which is unusual for a ranked team visiting one of the top teams in the nation.

After an embarrassing 90-54 loss to #9 Kansas on December 8th, the Buffs were looking to show that they are serious contenders in the Pac-12.

Colorado didn’t have to win against the Wildcats Thursday, but they did have to show just a little bit of fight and competitiveness, two factors that were completely absent in Lawrence nearly a month ago.

And those two aspects were there for the Buffs Thursday. They did everything right, especially in the first half. Smart shot selection (10-for-21, 47.6% from three-point range), controlled ball handling (only four turnovers in the first), and excellent defense (Arizona shot 25% in the first half). However, all this put together meant nothing for the Buffs in the end, as their best effort of the season was unfairly snatched away.

At the very end of the game, Buffs guard and Monarch High alum Sabatino Chen hit a three-pointer that banked off the glass to give the Buffs what seemed like a thrilling 83-80 victory (click here for the full video). However, the referees huddled over the video monitor for a few minutes, and shockingly, reversed the call. The Buffs were stunned, and the Wildcats cruised to a 92-83 victory in the overtime period.

The call seemed controversial even with slow-motion replay, but many disagreed wholeheartedly with it and took to Twitter to vent their frustrations. Some were a little kinder than others in expressing their displeasure, but the impartial observer seemed to generally agree with the angry Buffs fans. ESPN analyst Andy Katz said, “I have watched this over and over again and I think it has to count,” on his Twitter account. “CU has the right to be upset.”

The media buzz caused reactions from even bigger names, such as Los Angeles Clippers guard and five-time All-Star Chris Paul. This is what Paul had to say about the would-be game-winner from the all-time leading scorer in Monarch basketball history:

According to ESPN analyst Jimmy Dykes, page 37 of the college basketball rulebook says, “When definitive information is unattainable with use of the monitor, the original call stands.” (He also added “CU got robbed” to the end of his tweet).

The definitive information is nowhere in sight here, as all still-frames of the replay show that, if anything, the ball left Chen’s hand before the buzzer went off. This means that what should have been the greatest sports moment in Chen’s life (he also scored a career-high 15 points in this game) was taken away because the rule wasn’t applied correctly.

The refs needed to stick with the call on the court, which was that the three-pointer counted, because they didn’t have clear enough evidence to overturn it.

It really is a shame that the referees felt the need to unnecessarily assert their authority and strip Chen and the Buffaloes of a well-deserved win.  Even worse, Chen, who will most likely be done with his basketball career come graduation, may never get such a great moment on the court again. He deserves to have had that three-pointer count in a game which his senior leadership helped propel the Buffs to a near-victory against a top team in the nation.

Even if the Pac-12 decides to reverse the call, which is pretty unlikely anyway, it wouldn’t be the same at all. The Buffs, and especially Chen, should have had their chance to celebrate on the court in Tucson.