Senior Matt Michaelis shares his love of Doctor Who and sprinkles in a little advice on life in general. 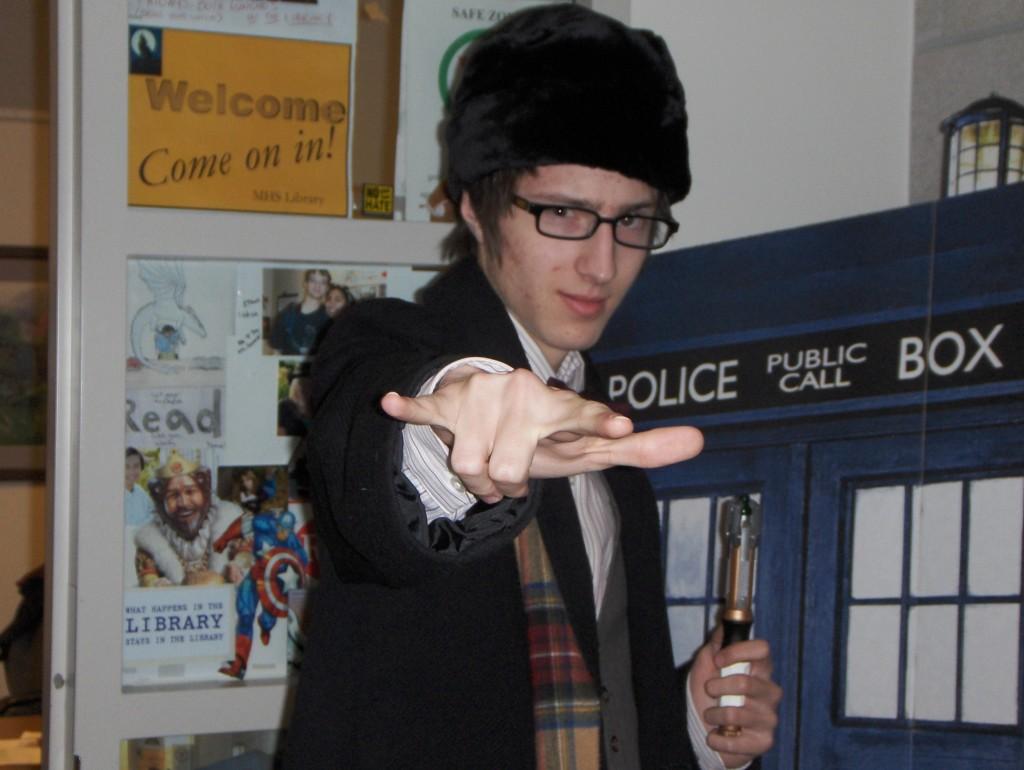 Senior Matt Michaelis is the type of person that you would notice while walking down the halls. It’s not that he has flaming red hair or some sort of piercing connecting his earlobe to his nose. Michaelis, like many people of our generation, is a die-hard fan of Doctor Who. Every day, he wears a suit and a bow tie/scarf, so that he looks similar to the Doctor, but not for the reasons you might think.

The Howler: What do you think is unique about your personality?

Matt Michaelis: “Unique? Well, we’re all unique in a way, but it’s much more difficult to tell looking from the inside out than from the outside in what actually differentiates ourselves from the rest of the world. I can only consider myself an observer, and my personality really only exists to those who perceive, or rather observers of me. So you’d probably be able to answer that question better than I from even a brief encounter. If that all makes sense.”

MM: “The building itself is quite well designed, aside from minor qualms with overcrowding in B-Hall, but it’s not about that. The merit of a school isn’t about how big or shiny it is; it’s about the people, and Monarch is defined by its students and teachers. So in a roundabout way, I guess I’m saying that I enjoy the company of nearly everyone at the school, and they praise me for dressing like a children’s TV show character, rather than insulting or berating me. It’s that sort of acceptance that differentiates Monarch from nearly any other school. And that’s why I think it’s brilliant.”

TH: Is it true that you are a Doctor Who fan?

MM:“I think I have to say yes, in the respect that I’m an absolute fanatic, though I think I’d be more accurately described as a zealot. It may be a tremendously frivolous pursuit, but I’ve derived a lot from this silly little show. Because it’s not just a show, it’s so much more than that. If you strip it down to the absolute base ideas, it’s an amazingly human story that I’ve found to be so enthralling, so captivating, that I’ve integrated it with a good portion of my life. At its core, it’s a story of a man who gave up an easy, comfortable, safe life, knowing he’d be exiled and hunted by his own people, by stealing a time machine, and going on the run. Why? Because he couldn’t stand the idea that his people had so much power, such an opportunity to do good, and never used it. He isn’t motivated by money, or power, just by what he sees as the right thing to do. He doesn’t see himself as a hero, no matter how many planets he saves. He’s just a man who made a promise to himself. Never cruel or cowardly, never give up, never give in. That’s the promise of the Doctor, and why he chose the name. That’s just how I see it, anyway.”

TH: Do you intentionally dress up like Doctor Who every day?

MM: “Yes, of course. If for no other reason than that it’s an astonishingly effective filter. People who are innately curious, fans of Doctor Who, or anyone who has any sort of affinity to the unusual are drawn to me. Those are the people I love the most. And the way I dress does more than show other people exactly who I am at first glance, but it also shows me their true colors. I can tell what people are like from their reaction to me. I can see their curiosity or apathy, their kindness or cruelty. I’ve met some of the most amazing people because of my scarf and bow tie, and the idea of my life without those amazing people scarcely bears thinking about. It’s also because, at my core, I just want to help people. The Doctor is a symbol of that; a symbol of kindness, and selflessness. My clothes just reflect that, and serve as a reminder of the type of man I wish to become.”

TH: Would you say that there is a whole community of Whovians?

MM: “ The fact that the word ‘Whovians’ exists is pretty telling. There’ve been Whovians since the 1960s. There are even different kinds of Whovians, some who’ve watched every episode, read every book, and heard every audio play, and some who’ve just seen the 11th Doctor. But they’re still connected, united by the same community and the same show that’s been telling the same story for 50 years, and has no end in sight. There are even plenty of Whovians at Monarch, giving them all common ground to talk and have fun even when they might know nothing else about each other. All they know is that if someone likes Doctor Who, they can’t be all that bad because it takes a very special type of person to appreciate the show. It’s certainly not for everyone. It takes a willingness to believe the impossible, and a longing to see the stars. It takes cleverness, and acceptance to accept the show for what it is, even when it’s silly or campy. That’s what makes the Whovian community so amazing. Except for the people who just watch because they think the Doctor is hot and not actually see what the show’s about through the hearts in their eyes. They can get a bit tiresome. Other than that, from my experience, Whovians are some of the nicest people you’ll ever meet.”

TH: When did you first start watching Doctor Who?

MM: “I started watching the show in 2007 when it was recommended to me by a good friend after I asked her about the robot thing on her T-shirt. The first Dalek I ever saw was on that shirt, and I guess that was my first encounter with the show. It’s a hard story for me to tell, and I won’t mention her name here, because she recently passed away. If you knew her, you’ll know who I’m talking about. She was one of the most fantastic people I’ve ever had the honor to meet. I don’t mean to depress anyone with this, but I just think it’s right to mention that she made me into the person I am today. In a way, everything I am I owe to her; everything I do, I do in honor of her.”

TH: What do you do in your free time?

MM: “Free time? There’s no such thing as free time. There’s just time. We all have a set number of years, months, weeks, days, hours, minutes, and every second of every minute of every day of every week of every month of every year is the same. It’s like money. Every dollar in your wallet is the same, but you can spend each one differently. Some people have more money than others. Some people waste their money, and others make every penny count by spending it only on what will be best in the long run. Some people give to charity, and some people only use it for themselves. Time’s just the same way; you just have no choice but to spend it constantly. The only choice you have is what you spend it on. That being said, I have a hefty investment into writing. Which I assume is evident due to the fact that I used 150 words to say “I like to write.”

TH: Is there anything about Monarch that you wish you could change?

MM: “Any complaints I could have about Monarch would be issues with the American education system in general, and not specific to Monarch. For instance, school should start later, as teenagers need more sleep than any other age group. Another problem is that the curriculum is designed as one size fits all, and doesn’t take into account that different students have different interests and thrive in different subjects. Your life begins to revolve around little letters that determine your worth as a person. It’s an incredibly silly system in need of a total overhaul, and Monarch just falls victim to it through no fault of its own.”