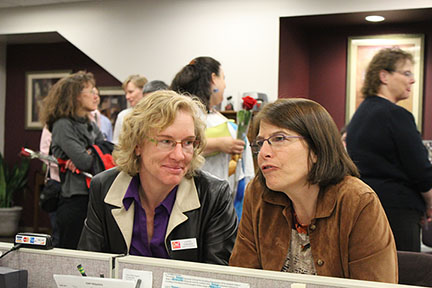 Laura Edwards, of Boulder, watches as Marie Banich, her partner, talks to a clerk during their Civil Union ceremony in the early morning hours of May 1st.

As rain and gloom pervaded the world outside revelers gathered inside of the Boulder County Clerk’s Offices and made merry. At midnight on Wednesday, May 1st, civil unions became legal in Colorado for gay couples. The Clerk’s office was alive with the sound of music from a deejay and the general hubbub of celebration. Families and friends waited in the downstairs portion of the building and cheered exuberantly upon each new couple descending the stairs into their welcoming arms. Congressman Jared Polis could be seen milling about shaking hands, hugging patrons, and handing out cupcakes. The event was put on by OUT Boulder. OUT Boulder’s mission is, “to foster safe environments for self-expression, gathering, support, and dialogue; advocate for social justice; collaborate with others who share our vision; celebrate the contributions of the many facets of our community; and educate the public about the experiences of LGBTQ people.”

Executive Director of OUT Alicia Lewis emotionally addressed the crowd before the ceremonies began. “Tonight is a big step for gay rights in Colorado and loving couples will gain the right to make official their love for each other” said Lewis. Over the course of four hours early on Wednesday morning 48 couples made their relationships official with a civil union certificate.

Lewis emphasized throughout her speech that public opinion is currently swaying in the favor of gay marriage equality. President Obama has voiced his opinion publicly that the nation must move forward by extending marriage equality to gay people. Also, according to an article by The Huffington Post on April 14, 58% of the American public support the legal recognition of gay marriage.

One couple that was further solidifying their relationship was Laura Edwards and Marie Banich, both of Boulder. Edwards and Banich have been together for 12 years. Edwards echoed the feelings of many others in attendance, saying, “I think it’s one more step towards marriage that we want to take without hesitation. It’s been official between us for a long time, but this is one more way to solidify our relationship in the eyes of society.”

Banich cited the legal upside of having a civil union as a reason for attending. “We used to have a slip of paper we kept that gave medical power to each other if we were in the hospital but now this will allow it to be official. Who knows if they would have accepted what we had written up before?”

The Boulder County Clerk has a history of playing a role in marriage equality issues. In 1975 Alex Hunter, the local district attorney, interpreted the Colorado statutes to be gender neutral and the County Clerk Clela Rorex issued several marriage licenses. These licenses were eventually struck down in federal court in the Adams vs. Howerton case. The issue came full circle late Tuesday evening as the building issued completely credible civil unions.

With a smile on her face after making all of her paperwork official, Edwards said, “legally, socially it is very important to us, but marriage equality is where we want to go.”

The Supreme Court is currently deliberating over a case involving California’s Proposition 8 which puts a ban on same-sex marriage. Since 2002, Colorado has had a same-sex marriage ban written into their constitution.

While it was a joyous evening for Edwards and Banich they reiterated the thoughts of so many others when they said, “The fight is not over, not by a long shot.”