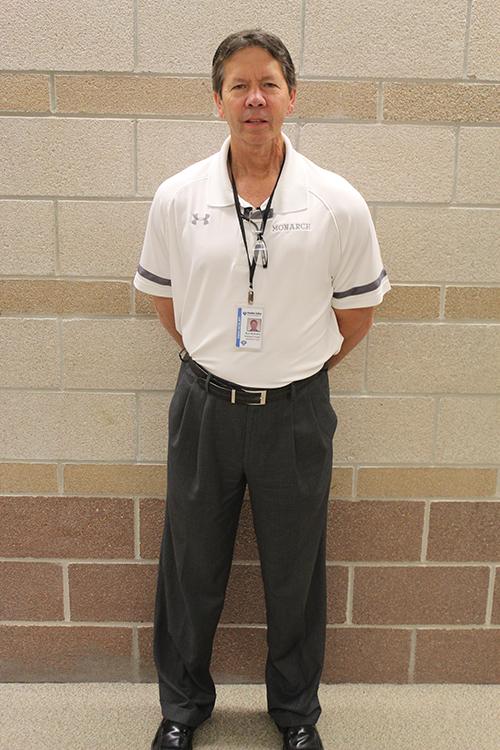 Newly hired Monarch Athletic Director (and Broncos season ticket holder) Russ McKinstry got the job in June after undergoing a long process of background checks, interviews and screenings when his love for all kinds of sports and the Boulder County area brought him to Monarch.

“I was extremely excited to be selected as the candidate to take this position,” said McKinstry.

McKinstry was intrigued by the job opening because of the significant reputation of Monarch. His career first began as a basketball coach at age 23, at a small Kansas high school. “They had a 42-game losing streak in basketball, within two years we were in the state tournament, and three we were state runner-ups,” McKinstry stated.

In addition to being an Athletic Director, Assistant Principal and Activities Director prior to being at Monarch, he was also the head basketball coach at Lewis Palmer High School in Monument, and led them to two consecutive state championships in 2012 and 2013. “One of my players is a very good player for CU, Josh Scott; he’s probably going to be a first round draft pick in next years’ draft,” said McKinstry.

McKinstry has found great interest in what he has seen so far at Monarch, especially in the use of technology. “I haven’t been a part of a school where technology is so emphasized,” McKinstry said. “Students are so proficient, being allowed to utilize it within a school setting.”

Along with innovation in technology, McKinstry has seen a different climate within Monarch in comparison to others like Lewis Palmer. “It’s a real attribute, a positive thing; you get to see students who come from a variety of different cultures,” said Mckinstry.

With his involvement in high school sports as a coach, athletic director and planner, McKinstry has been impressed by the amount of school spirit he has seen at Monarch thus far. “Being a 5A school, the involvement in athletic events and activities is even greater here, and I didn’t expect that.”

Most of all, McKinstry hopes to bring fluidity and ease to all coaches and players at Monarch. “As long as their needs are met smoothly, that is my goal as an AD,” said McKinstry. “I want to give equal support to all of the programs.”

“My philosophy is to make sure the coaches, students and athletes have everything that they need. I try to stay out of their way because they’re the ones that deserve the recognition and the glory,” McKinstry said.