The War On Drugs: America’s Next Great Rock Band? 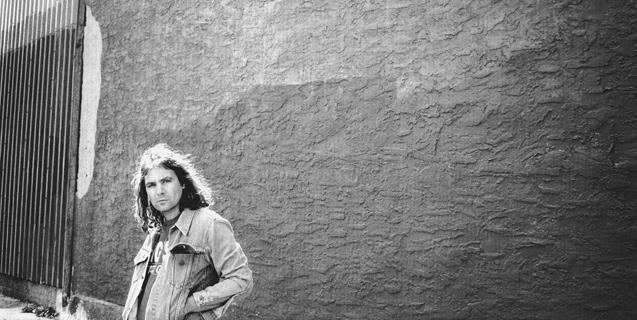 Preparing for their set at The Ogden Theater in Denver on October 10, Adam Granduciel, front-man and chief songwriter of the ambiance-stricken alt-rock outfit The War On Drugs steps out onstage as the rest of the band is testing their equipment; Granduciel swings his clean-cut Fender Mustang over his shoulder and begins to test the arsenal of distortion pedals at his feet. The singer-songwriter is known to be somewhat of an equipment junkie — Owning a vast number of pedals and effects that help deliver The War On Drugs’ atmospheric, ample sound. After a meticulous period of testing instruments, Granduciel clips a capo on the middle of his fret-board and a set unlike any you’ve ever seen begins as the band thrusts into motion with “Arms Like Boulders”, a song that renders Granduciel’s vocals a wholesome tone of Dylan-esque, poetic observation layered over slick harmonics and buoyant guitar melodies. Over the course of their set, the band wades through a deluge of songs, engaging in lengthy, widespread breakdowns in between verses and consistently dynamic progressions thanks to instruments ranging from a saxophone, a twelve-string guitar, and a stockpile of synthesizer effects that charismatically accompany the fluid lead guitars. Stage banter is reduced to a minimum as Granduciel hardly speaks in between songs, instead launching his backing band into a new fleet of melodies and illustrious lyrics.

The War On Drugs formed in 2005 subsequent to Granduciel meeting Kurt Vile: a fellow Bob Dylan enthusiast (to phrase it lightly) who bonded with Granduciel on a musical level. The two musicians — Among the organist/drummer Charlie Hall, drummer Kyle Lloyd, and bassist Dave Hartley — Began playing as The War On Drugs in 2005, but when their debut full length Wagonwheel Blues dropped in 2008, Vile departed the band in hopes to kick-start a solo career. Following various line-up changes, the band dropped the Future Weather EP in 2010 to tease their 2011, critically acclaimed full length Slave Ambient; a stormy, psychedelic record which propelled The War On Drugs into popularity and introduced a wider audience.

Despite the band’s impressive history, it wasn’t until the band dropped Lost In The Dream earlier this year that they distinguished themselves as a truly unprecedented talent capable of shattering the American dreamscape. Written and recorded while Granduciel struggled with fits of depression and crippling anxiety, Lost comes to encompass a landscape of breezy psychedelics and sharp Americana along with a fervidly weighted emotional range. Atmospheric breakdowns of psychedelic, distorted guitar riffs, ambient synthesizers, vast, clear-sky melodies and Granduciel’s celestial, luminous lyrics that expose a wide range of human struggles, fears, and joys all come to be elements that this illustriously produced and arranged LP bring to the forefront.

This redefining album comes to represent a new form of the ethereal American dream; an updated, refined version of the idealistic lifestyle that Bruce Springsteen molded on classic records like Born To Run and Darkness on the Edge of Town. Lost tackles the American dreamscape, each of it’s songs begging to be played with the windows down as you’re headed down a bleak interstate road with nowhere specific to go and nothing to your name except the fading sunlight on your back. The LP fuses the spirit of signature Americana similar to that created by Bob Dylan and Tom Petty as well as the hardened spirit of Springsteen to form one of the most splendid, elegant albums of the 21st century as a whole.

The War On Drugs quietly scream brilliance, potential, and down the barrel of musical history as they continue to write, record, and perform. Few bands to breakthrough over the past decade have managed to achieve such a distinguished sense of identity and graceful style while forging a road which leads to the American dreamscape. The War On Drugs can accompany your bliss, suffering, and melancholy all in one; a quality that most modern rock bands lack, despite some of their popularity. To immerse yourself in one of the best alternative rock bands to emerge in recent memory, get lost in The War On Drugs’ discography. You won’t regret a minute of it.

Lost In The Dream

Eyes To The Wind

Come To The City