Students redefine the age of feminism 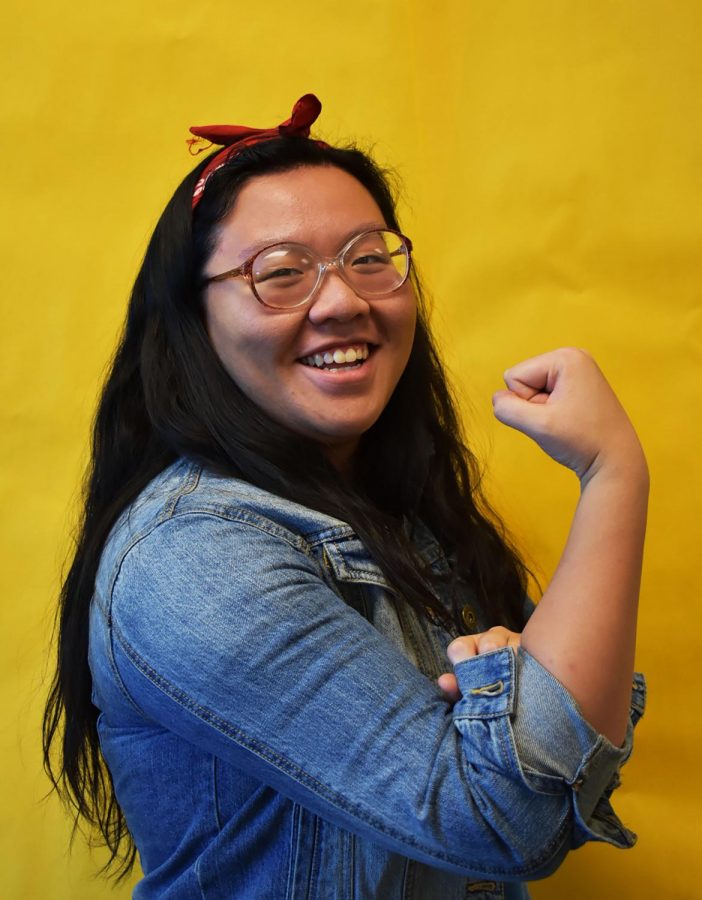 Vicky Vien poses as Rosie the Riveter. She has helped the Making HERstory club push for women's rights in the MHS community

For most of history, the definition of feminism has been to advocate for women’s rights on the basis of the equality of the sexes.

However, two different branches of feminism, meninists and radical feminists, or “feminazis,” have warped the original intent of feminism to mean something entirely different.

“Personally, I support feminism and equal rights and all, but at this point, I feel like everybody’s got equal rights, so I feel like it’s kind of beating a dead horse,” Gavin Varner ‘21 said.

Radical feminists take the idea of feminism to a new extreme with the belief that women are above men.

“They use what I like to call a lot of ‘non-problems’ to justify certain things,” Varner said. “There was one feminist that posted an article she wrote herself that men should have to take a test to earn the right to reproduce.”

This warping of traditional feminist beliefs has lead to the women’s rights movement being discredited by many, including another twist on feminism called meninism.

Meninism is a term created to mock the feminist movement and represents men who believe that changes in women’s rights mean men will see oppression.

“The other day, actually, I was coming back from the assembly, and there was someone behind me who was like, ‘oh great, another feminist who’s going to complain and claim that someone sexually harassed them, and that way they’re gonna get their side, or whatever,’” Vicky Vien ‘20 said.

However, these radical feminists have defined an entire movement and changed the intent of the feminist movement in the eyes of meninists and those who support women’s rights.

Others think feminazis are taking the original meaning of feminism and changing the intent from equal rights, to a movement where women are superior to men.

Despite all of this, people still rally behind the feminist movement because they believe that feminism “is great, everybody deserves to be equal. No one should be worse than others not based on gender or anything,” Calvin Williams ‘19 said.

Vicky Vien ‘20 is the current secretary of the Making Herstory club at Monarch and is running for co-president next year. She believes that the older generation is spreading gender bias to the younger generation and putting defective ideas into their heads that they don’t understand.

“I think that’s another issue, because a lot of the younger generation are being taught these really hateful things, and they don’t understand them,” Vien said.

An important step that Monarch has taken to include active feminism at school is the establishment of the “Making Herstory” club. This club actively talks about the steps to making gender equality more present in the school.

“Our current project is a feminine products drive, and our goal for that is to make things like the word ‘tampon’ or ‘menstrual cycle’ or ‘period’ to not be weird,” Vien said. “Our goal is to make it normal because it is normal.”
These feminine products are going to Safe House in Boulder to be distributed to the homeless and abused women and children in the Boulder area.

The current school dress code includes the ban of clothing that is “inappropriately sheer, tight, strapless, high-cut, loose, low-cut or exposes undergarments.” These rules aren’t always enforced, but Making Herstory is working on changing the dress code to eliminate sexism, starting with the tube top.

“The other day we were talking about tube tops, because Herstory is working on the dress code, and one of the administration was talking about how people would have the urge to pull down on someone’s tube top, and I was, like, the fact that you thought like that makes me think that you view sexual harassment as very likely,” Vien said.

While the dress code may seem like a small issue, some members of Making Herstory believe it fosters sexism and victim shaming. Not only was Vien concerned by the administration’s comment, but that the objectification and sexual assault of women was not being addressed at Monarch.

“There’s no way that [sexual assault] is not happening, but it’s very under the radar, which is honestly terrible,” Vien said.

However, just because it is under the radar does not mean that sexual assault goes unnoticed or doesn’t happen.

“It really depends on the kind of people, because when I’m in the football locker room, it’s pretty bad when it comes to objectifying women. But that’s to be expected, it’s just a massive group of guys who don’t really mean it,”Varner said.

However, many girls don’t feel the same way and believe that the objectification of women shouldn’t be expected.

“It’s also up to the guys, if they are uncomfortable around the girl who is dressing [with] a little bit more skin showing, and they can’t control themselves around them. Well, that’s their fault, not the girls,” Kate Call ‘20 said.

Victim shaming teaches girls that it is better for them to cover up and stay cautious at all times. Contrastingly, the concept that boys should keep their hands and eyes to themselves is not customarily taught in society.

“I feel like they should be able to wear it [what they want],” Williams said. “Like, the whole argument with guys being distracted or whatever, I think it’s bull. Just because it’s not the girls’ problem if the guys is getting distracted.”

Making Herstory and other feminists believe the dress code perpetuates victim shaming and are working to improve this at Monarch.

Women’s rights have come tremendously far since the days of the suffragettes with women having important roles in society. Women now attend school for math and science and holding important roles in the government. The female representation and opportunities the United States has skyrocketed.

“I know there are always those who disrespect at times, but I have a lot of guy friends who treat me the way I wanna be treated, and they respect me for who I am and my views and I respect them,” Vien said.

For most women in our country, conditions are improving, and they are recognized as important human beings. However, there are still aspects of the way that women are treated and regarded that are urging feminists to advocate for.

A recent movement that has been based on fighting for female recognition is the #MeToo movement, which campaigns for victims of sexual assault and rape to be acknowledged and taken seriously.

Many celebrities and mainstream media icons have spoken up and gotten behind this movement.

“I think feminism has definitely been a little more mainstream,” Call said. “There have always been people out there who have been very open about how they think of themselves as women and I think, just, now, like, with the #MeToo movement and other celebrities coming out with ‘I’ve been attacked,’ like rape… sexual assault and stuff like that.”

Women have also been speaking up about the payment inequality between men and women. In 2018, women make an average of 80.5 cents for every dollar a man makes. Though the wage gap is slowly closing, this shows that there is still inequality in society.

Even though women have come far in education, politics, and the workplace, the fight for complete fairness among men and women remains there to this day.