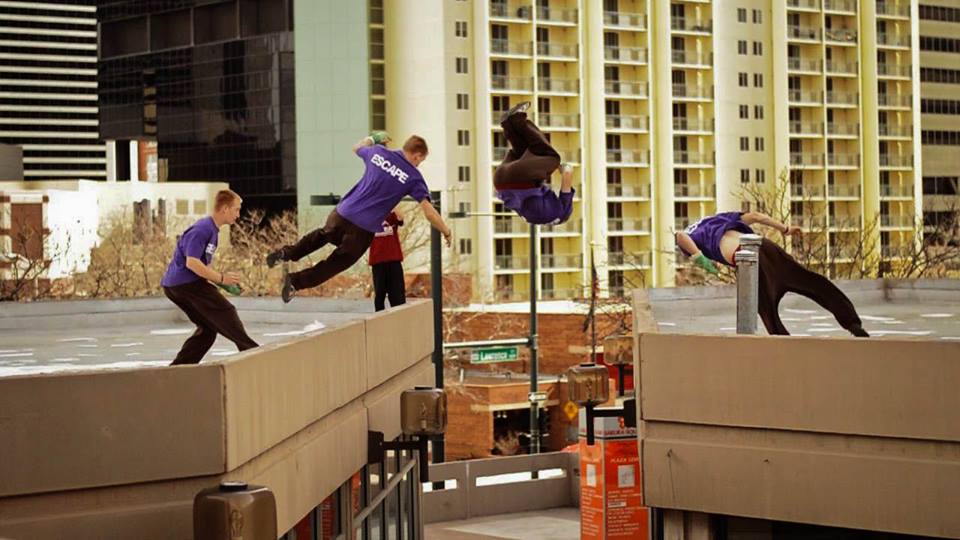 Casey Wilson flipping off one rooftop to another. This move is called a side flip.

Senior Casey Wilson revels in freedom and creativity of fast-growing sport of parkour.

Gyms. They suck, right? They’re hot, they smell, and they mean working out. Well, not this one. APEX Movement is a Parkour gym in Boulder, and Monarch’s own Casey Wilson is one of the gym’s most advanced members.

Parkour, or free-running, is a sport of growing popularity. “Parkour is the art of overcoming obstacles the most efficient and creative way possible, including flips too because they are fun.”, Wilson said.

Unlike other sports, there is no “handbook” for parkour. “Freerunning is different because there are no set rules like every other sport. You can do whatever movement and flip you want to try, rather than being forced to do what a coach tells you.”

Wilson was inspired to start freerunning after seeing a friend show off some moves. “I got into parkour after I saw my friend do a wall flip (a backflip off a wall). He took me to a parkour gym called Apex Movement and I loved it. From that moment, I have trained ever since.” After doing parkour for four and a half years, Wilson has recently become sponsored by Move To Inspire, a parkour group with a mission of sharing the sport with as many people as possible.

“It’s really fun being a sponsored athlete because you get free clothes. I’m also lucky enough that my sponsor finds performances for me to take part in where I can go show people what parkour is if they don’t know. If they do, then I’m glad to show them what I’m capable of doing.” Wilson said.

Although parkour might appear different than other types of athletics, the competition is no less intense. The goal of a competition is to get as many points as possible while maneuvering yourself around the obstacles in the gym. Four judges score you based off of four categories: difficulty (“How hard the move is.”), creativity (“How creative was the move, and has anyone done the move before (in the competition).”), execution (“Good landings rather than landing on your back or head.”), and flow (“How well you connect the moves rather than looking around for what to do next.”). “Competitions usually consist of two rounds, each round being 60-90 seconds long. Both rounds you are constantly moving around the course, doing very difficult moves that require huge bursts of energy, like flips, so you get tired really fast. Typically after the first round, the top half move on to the second round.” Wilson said.

Learning new tricks for competitions is all about breaking a skill down into small steps, and perfecting each part before you put them together on a real terrain. “In the gym we have a foam pit which is basically a pile of little foam cubes. They squish and move around when you land on them, so there’s a very small chance you can hurt yourself. Then I practice the move onto a mat on the ground. Next I do the move onto the ground, but typically a little mat rather than going straight to cement. Finally, I do the move outside when I can land it consistently in the gym. I typically do my first attempt onto grass or wood chips; any surface that is softer than concrete.”, said Wilson.

Competition is obviously a huge part of the sport, but there is more to parkour then nailing the sickest moves. Expressing yourself with movement and creativity is the heart of the sport. This sport takes incredible strength and dedication, and as it is so much more dangerous than other sports, a willingness to take risks. “Parkour is mentally challenging because you have to overcome fear all the time. The fear of heights and the fear of doing a new flip are always being put into your head and you must overcome it.” Wilson said. Needless to say, adrenaline junkies, this is the sport for you.

Every athlete has inspirations that they aspire to be like. For Wilson, these include his teammates, and some of parkour’s pioneers. “I am inspired by all of the people that originally started putting out videos when parkour first came into existence, such as Daniel Ilabaca, Phil Doyle, and Ben Jenkin. I have a ton of inspirations.”

Interested in trying out parkour for yourself? Look up APEX Movement to find more about classes and the sport of parkour.