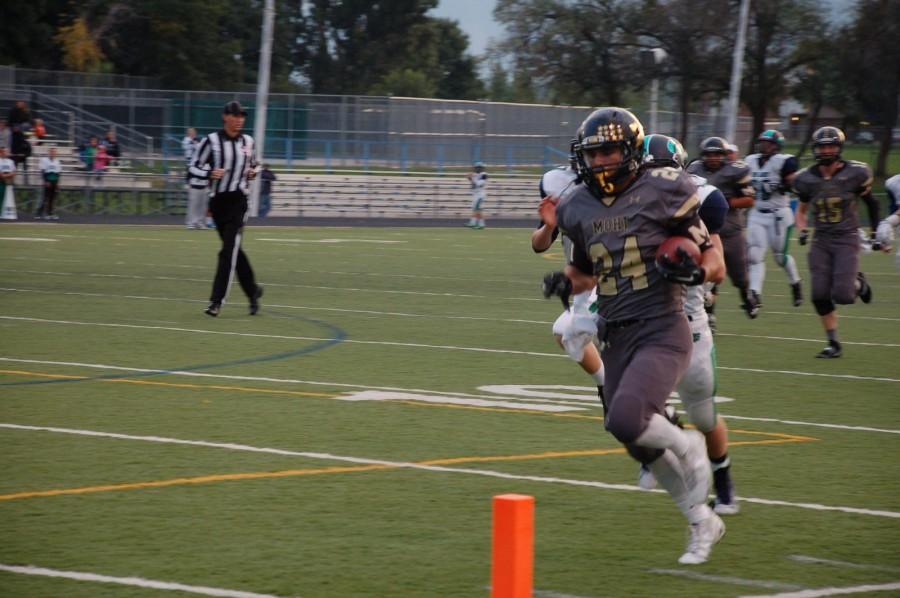 Monarch running back Philip Bubernak, number 24, runs the ball in for a touchdown during Friday night's game against Standley Lake. The Coyotes won with a final score of 43-7.

The Monarch Coyotes couldn’t have kicked off the 2014 football season any better Friday night, as they routed the Standley Lake Gators 43-7.

Going into the game, the Gators looked like a serious threat for the Coyotes. Although they were shut out in their season opener against Pueblo Central, they have a talented roster complimented by great coaching.

After the game, Monarch head coach Phil Bravo spoke about the Gators and their overall team. “Defensively, this team pose(d) a lot of problems for us because they’re tough defensive kids who tackle well and hit hard, so we really worked on our physicality from our offensive standpoint.”

On the field, though, Monarch had no problems taking care of business. Senior running back Philip Bubernak was the clear standout from the game, scoring four of the six Monarch touchdowns.

Bubernak made his presence known right off the bat, breaking loose for a 40 yard rushing touchdown on Monarch’s opening possession of the game to put the Coyotes up 7-0 early. That run was quickly followed by two, seven, and 35 yard touchdown runs respectively for number 24. When asked how it felt to be back out on the gridiron, he responded, “it felt great getting to be out there again.”

Besides Bubernak, senior captain Bruce Oliver also cashed in his own touchdown run for the Coyotes in the second quarter, and freshman running back Ernesto Chavez did just the same in the third. These two scores proved that Monarch has a variety of talented options to choose from throughout the upcoming season.

Next week Monarch will face the 0-2 Poudre Impalas of Fort Collins for the homecoming game at Warrior Stadium.
Coach Bravo summed up the game the best, by saying, “It felt great [earning a win in the home opener]. Being 2-0 heading into league play next week feels very good.”