An Objective Look: The NHL Standings Around the Middle of the Season 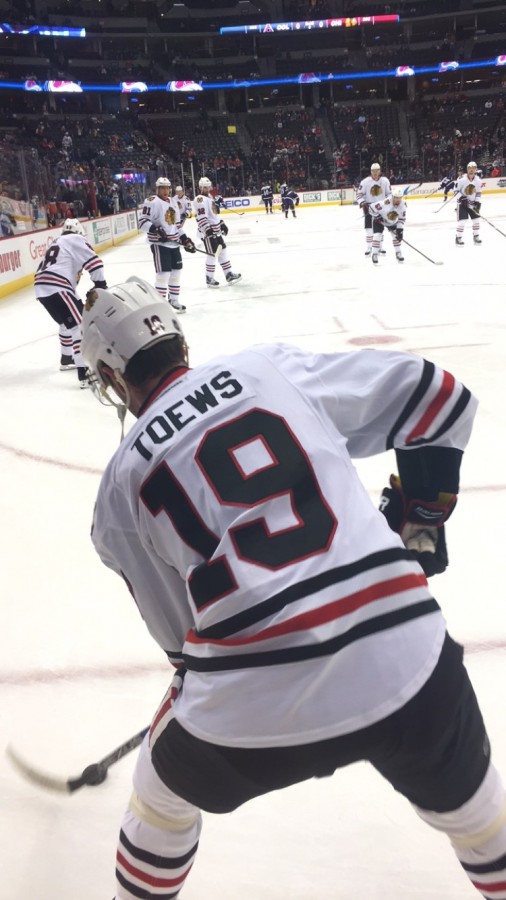 Leaning forward, Hawks captain Jonathan Toews prepares to dish out a pass to one of his teammates during warmups at the December 31st game against the Avalanche at Pepsi Center in Denver. The Blackhawks got their winning streak going with a 4-3 OT win to kick off the new year. Since then, the Hawks have not lost a game, and their streak is changing the standings and putting them in contention for a back-to-back cup win.

NHL Standings can rise and fall with the days, perhaps more than any sport due to the point system. In essence, there are three ways that a game between two teams can pan out.

2 points– a win, plain and simple. If you won 6-0, 2-1, in overtime or in a shootout. Regardless of how fantastic or how long the win took, you get two points for the win.

1 point– a consolation point of sorts. If you played a close enough game to end in overtime, you gain a point. A point may seem minimal, but in the Pacific Division, for example, 2 points separate teams 3(Vancouver) – 6(Calgary). Third place is an automatic berth to the playoffs, sixth place means you are out of the playoffs all together.

0 points– a loss in regulation.

As of right now, the divisional scores aren’t crazy tight. There are definite front-runners for both the playoffs and the cup. The wild-card race can be more dicey, and the gaps between 4-7 are super tight in some divisions. There are some teams hanging on the edge of a wild-card spot, and some teams are pretty much done for, unless they pick up their game and fast.

With a front runner like Alex Ovechkin, it’s hard to have a bad hockey team. Ovi just scored his 500th NHL goal, a crazy feat accomplished by only an elite number of athletes in their entire NHL career. Coupled with Oshie on the wing and Backstrom under center, the caps boost a top line that’s hard to beat. Beyond the first line, there’s not many headline-worthy names, but they are doing work to get them in complete control of first place.

I think everyone except for Blackhawks fans groan when they see this powerhouse looming at the top of the ranks. The facts are stellar though, this modern ‘dynasty’ isn’t going anywhere anytime soon. From Corey Crawford to Brent Seabrook and Conn Smythe-winning Duncan Keith to Jonathan Toews & Patrick Kane, and rookie standout Artemi Panarin, there is really no facet to the hawk’s roster that is lacking. Experience and talent will be the name of the game for these champions to bring the cup back home to Chicago (for a 4th time). With an undefeated 2016 thus far, and a new franchise record to boot, the Hawks have caught the Stars in a battle for first place in the Central Division.

A few years ago the Kings were the gold standard for the league. The Stanley Cup traveled from Chicago to LA to Chicago to LA to Chicago, it was a time in which the Western Conference was pretty much the only conference that mattered. Since then, the Kings entered a post-title slump and didn’t even make the playoffs last year. They are back in control this year and looking very good as of now. Between Kopitar, Doughty and Quick, the Kings have a stellar line up that isn’t going out of the headlines anytime soon.

A few weeks ago, a rejuvenated Stars team looked to be having the season that most fans envisioned a few years ago. Since December 29th, the Stars have only won twice and have garnered a mere 6 points to give up their comfortable 13 point lead of the central division. Seguin-Benn-Sharp is arguably one of the top lines in the league, with 2 all-stars on the top line. Whether this is a turning-point in the season, or simply a lull for the team, well only time will tell that story. Regardless, the talent and hunger for a cup on this team is too great to overlook their chances at a long run in the playoffs.

Not a name that many people are used to seeing at the top of the standings, the Panther’s 12 game winning streak propelled them to the top of the standings, and have now dropped four straight games that looked to be easy wins. All-star Jaromir Jagr leads the team on a top-line that not many people have seen big things about. Fans in Florida aren’t the mightiest, but the Panthers play might change that. To many, Jagr and co. may seem like an underdog, but their talents and team dynamic can propel them to the top.

Every year St. Louis seems to “blue” it when they make it to the playoffs. With a star like Vladimir Tarasenko, it’s no wonder why the team makes the playoffs consistently, and it’s a strange sadness for Blues fans as they seem to dissipate right as the playoffs begin. Now that they will have the pride of St. Louis (maybe the Cardinals) in the absence of the Rams, maybe the team will pick it up and become a top-notch contender. To many who just glance at the standings, this Blues team could win it all, but history is not on their side in that regard.

Led by Minnesota-boy Zach Parise and helped by star goaltender, Devan Dubnyk, and top-notch D man, Ryan Suter, the Wild have gone far into the playoffs the past three years only to be stopped by the Blackhawks in all three. Having never won a Stanley Cup or conference championship in their lifetime, the Wild are primed and hoping for a longer run. I think the fans up in Minnesota are hoping for two things: a warm winter, and either a conference championship or a Stanley Cup. Whether either of those will happen is a mystery as of now.

Former home to “All-Star” captain John Scott (that’s actually down in the AHL a lot of the time and is now a Montreal Canadien), Vermette, Boedker, and Larsson have contributed the most this season. In a place that isn’t the most welcoming for this NHL team, the Coyotes are playing some solid hockey in the desert and are currently solidly in a playoff spot out of the Pacific Division.

Home to the Sedin brothers on the top line, the Canucks do not boast a star-studded line up, but that isn’t an issue for them. The Canucks have moved down in the standings as of late, but they are primed and ready for a playoff spot, and their hunger for victory could just get them there.

One of two NY teams that is having a great season and is probably a huge source of tension in that huge state right now. The Manhattan version of a NY hockey team, they play at Madison Square Garden, and host some big names like Lundqvist as well as some less well-known powerhouses like Zuccarello.

The other NY team having a great season and causing tension. The Brooklyn version of a NY hockey team, they play at Barclays Center, and host some big names like their captain, John Tavares. Johnny Boychuk also makes waves on a national spectrum with his play, and underrated Kyle Okspoko is a top producer of points this year.

Dylan Larkin, the rookie standout, is leading this team this year. A powerhouse back in the day, the Wings have disappointed a tad in the recent past. They have made it to the playoffs every year for the past five years, but have not advanced to the finals in any of those years. The history and talent is there for a potential run at the cup.

Carey Price, goalie extraordinaire, took home the majority of the prizes last year at the NHL awards. This year, he is hurt. Led by star defenseman P.K. Subban, the Canadiens are struggling to hold their own without their star goalie. Price hit the ice for the first time as of late, so maybe his reemergence in the playoffs is looming?

A few years ago, the Bruins were at the top of the league, since losing the Stanley Cup to the Blackhawks in an incredulous 17 seconds, they went on to lose in the semis and then not even qualify for the playoffs last year. Led by all-star Patrice Bergeron, the Bruins are on the up and their power play is a huge part of their success. With a 28.5% success rate on the power play, many of their wins have come from a power play goal. With goalie Tuukka Rask, winger Brad Marchand, and Bergeron, the Bruins are poised for a long playoff run once again.

An unexpected front-runner in last years playoffs, the Lightning had a rough go of it in the beginning of the season. Since then they have made a reemergence after their post-cup loss slump. With Stamkos, Hedman, and Bishop on the roster, it’s no wonder why this team made it far in the playoffs last year.

Hanging on the Edge: On the edge of the playoffs/the wildcard spots/ the playoffs at all (too many to discuss)

Done For: Pretty far back in the standings and in points, a turn around, and fast, would be needed to get these teams in playoff position

Two words: Brandon Saad. The Blue Jackets thought they had it locked down when they acquired Saad from the Blackhawks due to the salary cap, but he can’t do it all himself. Summed up in a few words, the Blue Jackets have had a ‘Saad’ season as the league’s worst team right now.

The Oilers got Connor McDavid and thought they were golden, then he got hurt. The star rookie is not able to play, and the team is struggling because of it, that tells the story of their season.

The Maple Leafs are so disappointing to fans there is a Twitter account called “Did the Leafs win?” and they tweet “no” pretty much every day. The Leafs are pretty unpredictable and sometimes have these miraculous wins over heavily-favored teams, but it never seems to last.