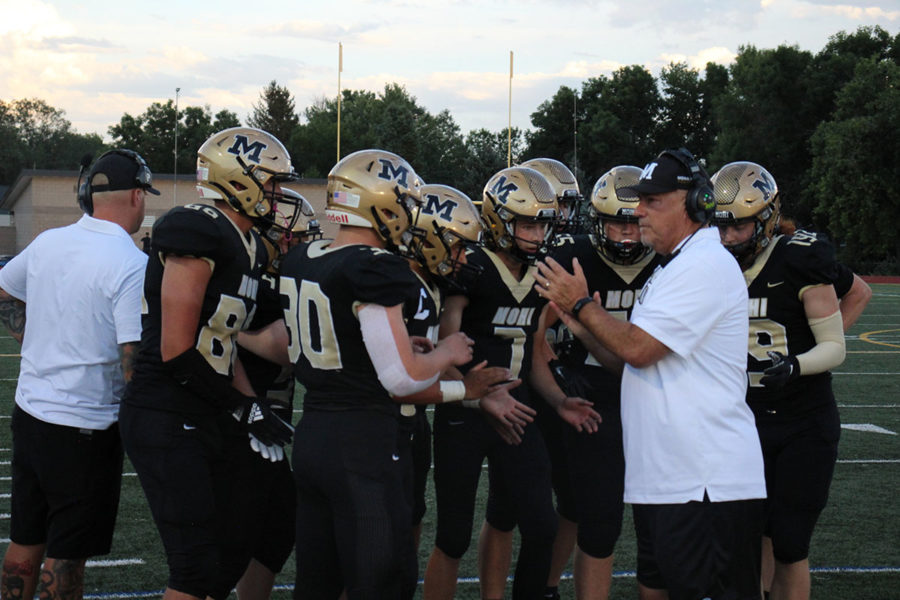 Coach Phil Bravo talks to his team before the game against Green Mountain on Aug. 27. He is retiring this year after a celebrated career.

As Phil Bravo led the Whittier Christian High School Heralds onto the field to play crosstown rivals Beaumont High School in his first game as a varsity head coach, things didn’t go according to plan.
When the captains of the Heralds won the coin toss, they followed Bravo’s advice and chose to defer, which meant they would kickoff to start the game.
Moments later, the red and gold uniforms of Bravo’s Heralds raced down to tackle the Beaumont kick returner, but couldn’t catch him. Bravo stood on the sideline, watching the first play of his head coaching career end with the other team scoring a touchdown and his team trailing 6-0.
Thirty-six years, over 400 games, 300 plus wins, and two Monarch state championships later, Coach Bravo is retiring from high school football coaching, leaving behind a legacy.
“I told the seniors on the team I’m really in the senior class with them,” Bravo said. “Not only age wise, but I’m graduating this year with them, too.”
It’s been a long road to get to this point in his career. After leaving California in the Spring of 1991, Bravo found himself in Colorado, seven years before Monarch opened.
The first stop for him was Centaurus High School as its head football coach.
“We did real well. Multiple league championships, a championship runner up, and two other semi final appearances,” Bravo said.
Seven years later, in 1998, Bravo became the head football coach at Monarch. A brand new school with only underclassmen. While many might have expected little from the team, Bravo never changed his standards.
“I never lowered my expectations, because this is something that I’ve never done,” he said. “Playing a varsity schedule, everyone else had three classes, and we joined their league. Our kids competed like mad dogs, and we went 5-5 in our first year.”
Defensive coordinator Aaron Paddock played for Bravo at Centaurus from 1991-1992 and has coached with him since Monarch opened. Paddock says he owes much of his knowledge to Bravo.
“For me personally, he has been my greatest mentor as an adult,” Paddock said. “I played for him for two years, then when I transitioned into being a teacher and being a coach, having him be a consistent person that I wanted to emulate and model myself after. I am going to miss that the most.”
Former Monarch football player and captain Jackson Bennett, a linebacker and tight end, played for Bravo from 2015-2018.
“Coach always had so much energy that it was contagious,” Bennett said. “He always had us very prepared for what was coming and the team that we had to play. He has a legacy at Monarch, and I’m sad to see him go, but I’m excited for him for the next stage of his life.”
In the Fall of the 2019 football season, Bravo achieved his 300th win as a head coach. According to a list compiled over a decade by Texas resident Steven Floyd, fewer than 300 high school football coaches in America have ever won this many games.
Current Monarch football player Griffyn Weber ‘23 hopes to make the most of his last season with Bravo.
“All of the crazy stories he tells us about his life, and the wisdom and life lessons that he shares with us is what I’ll remember the most,” Weber said.
Throughout all of those 400 plus games, he has been to multiple state championships, many playoff appearances, and tons of league championships at Monarch, Centaurus, and Whittier. However, Bravo says every game is just like the last, and he’s enjoyed every minute of it.
“I haven’t sat back and had some time to reflect, and it’s hard to do that when you’re driving the ship because you’re in the grind now,” Bravo said.
Through every summer and fall of 47 years he has been involved in football, Bravo has missed the things that don’t involve football, and that’s what he plans to do in the future.
“This is a fun group to leave and to call it an end with,” Bravo said.