Girls basketball stands out this season 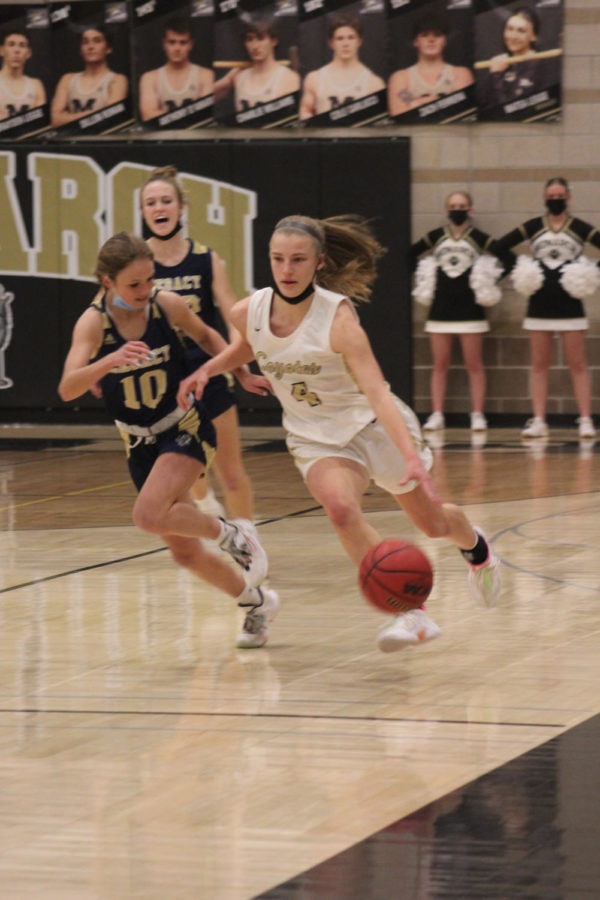 Natalie Guanella 23’ dribbles down the court during a home game against Legacy High School.

Dedication plays a massive role in the success of any sports team, and this year, girls basketball has some of the most passionate players yet.
“I like working with kids that really want to be somewhere,” Coach Mike Blakely said. “It’s fun to coach kids in a place that they want to be.”
Not only are the players committed, but they have developed bonds on and off the court.
“We spend a lot of time together, like after practices, we’ll go get lunch or breakfast or whatever, and I think we’ve gotten really close,” Natalie Guanella ‘23 said. “We work well together and we have each other’s backs.”
The team hasn’t won a playoff game in the past two seasons that Blakely has coached, but this year, he is confident in the team’s post season opportunities.
“We’ll definitely make the playoffs, and have a home game.” Blakely said. “I really want to win one, two, or three of those games, and I think we’re good enough to do that.”
Playoffs are a big deal for any team, especially at Monarch. Girls basketball is one of the school’s only sports that is among the top five in the state. With this ranking, Natalie Guanella ‘23 has high hopes for the rest of the season.
“I think it’d be really cool because Monarch is one of the schools that hasn’t been up there in a while. So, I think for us to even get to the final four would be insane, and everyone on our team knows we can do it,” Guanella said.